If you have never had crab, you are missing out on one of the most delectable seafoods in existence!

Main people may be hesitant to try it because they don’t like the smell or taste of fish or seafood in general. And despite being quite similar in nature to lobster, many people have never tried crab simply on the way it looks. 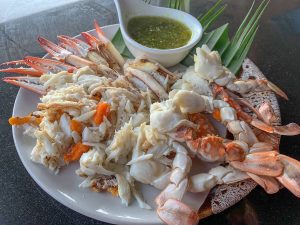 Crab tastes like a soft, salty and squishy white meat that is not quite the same as chicken, or steak. It definitely tastes like fish, but without the “fishy” after taste or smell.

Most people season it with butter, salt, or Old Bay which can greatly alter the taste in a pleasurable manner.

Crab meat is also not very filling, and people can often eat a lot of it before becoming full.

The knock of course is that it can take a lot of work cracking open shells, legs, and claws to get a small amount of meat, unless you are eating a dish where the meat is prepared, such as a crab cake or crab rangoon.

There is also “imitation” crab meat which is more of a highly processed food made of fish, egg, sugar, spice, and a number of other ingredients. Think of it as “filler” meat intended to replicate the texture and nature of crab meat.

Nothing beats the real thing however, and crabs are a delicious meal that can also be good for you in moderate amounts.

If you have been afraid to try crab because you are unsure if you will like the taste, well, as they say, “you only live once!”

You should learn to recognize bad crab meat when you see it. Make sure it is not dark or black in color!

Give it a shot, especially if you are preparing your own fresh catch out of the bay. It will literally not get much fresher than that!