While crabbing, you should be able to tell the difference between a male and a female.

But can you tell what a pregnant blue crab looks like?

100% of the time, it is good etiquette and sometimes mandatory to throw pregnant females back into the water. The reason is that declining populations in blue crab will suffer if there are no pregnant females around.

How to Identify a Pregnant Female Blue Crab 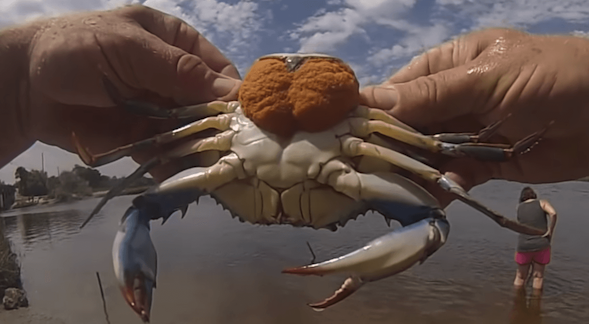 Although it can be tricky to identify a female at first glance, it is incredibly easy to spot a pregnant female due to the orange “sponge” that is attached to her abdomen.

Sometimes it is quite prominent and other times not so much, and this is usually due to how far along she is in the pregnancy.

If you ever catch a pregnant blue crab, you should immediately take it out of the trap and throw it back! Be careful of any lurking seagulls or predators as they will immediately pounce on their unsuspecting victim.

It takes about two weeks for the eggs to become ready and be released into the water.

One interesting point to note is that a female could be mature and mated with a male crab, but not look “pregnant.” This is because it happens at a later time in her cycle.

The bottom line is that you should never take “Sponge” crabs out of the water!

Just throw them back and go about your day. If you are lucky there are plenty of males waiting to put up a fight with you.